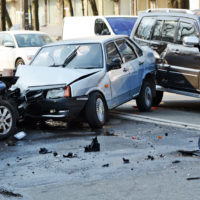 Turning left at a busy intersection that lacks a dedicated left-turn arrow can be a frustrating experience. When you feel impatient while waiting for a gap in oncoming traffic so that you can turn, it may be tempting to choose a smaller gap between cars than you normally would to make your move. This moment of impatience can have a lifetime of consequences. Read on to learn about the most common causes of intersection accidents.

Intersections play host to substantial portion of all accidents

While numerous reasons exist for intersection crashes, the cause cited in 44% of all accident reports describing intersection crashes was “insufficient surveillance.” In other words, the driver deemed primarily responsible for the crash failed to look carefully for other cars, cyclists, or pedestrians before driving through or turning at an intersection.

The NHTSA found that turning with an obstructed view was also a common cause of intersection crashes. Twenty-two percent of all intersection crashes occurred after one driver made a left turn. Turning before you have a clear view of oncoming traffic can be dangerous, especially when doing so after a light has turned yellow. The opposing cars you can’t see are likely to be accelerating to get through the light while you’re turning, which can result in a t-bone accident that puts you and any passengers at risk of major injury. A related common cause of intersection accidents is one driver making a false assumption about another driver’s behavior (i.e., assuming that an oncoming driver will stop at a yellow light rather than accelerate through it).

Use caution when driving through intersections

Keep yourself safe when traveling through intersections by following some basic safety rules. Never change lanes in or near an intersection, as a driver you can’t see who planned to enter the intersection may not be able to change their course after you’ve moved lanes. After your light turns green, wait briefly while scanning the intersection to ensure more cars aren’t coming. Always check your blind spots before making a turn to ensure that no motorcycles, bikes, or pedestrians are present. Finally, don’t assume that other drivers will yield or stop, even when their light turns red.

If you’ve been hurt in an intersection accident in West Virginia and need aggressive, dedicated legal help to recover the damages you’re owed, contact the Martinsburg personal injury lawyers at Burke, Schultz, Harman & Jenkinson for a free case evaluation at 304-263-0900.