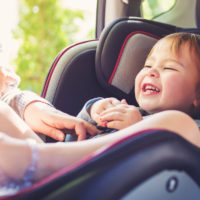 No matter how careful a driver you are, one of the most dangerous things your child does on a regular basis is take rides in the car. Car accidents are a leading cause of injury and death for small children. By carefully installing and using car seats, parents and child guardians may be able to protect their children from the harmful effects of a crash. Best practices on car seat use have changed, according to the American Academy of Pediatrics. Learn about the revised standards below, and speak with a West Virginia car accident lawyer if your child has been hurt in a crash.

The American Academy of Pediatrics (AAP) recently announced that small children should remain in rear-facing car seats as long as possible. Prior to the recent announcement, the AAP had recommended that parents have their young children ride in rear-facing seats until at least reaching age two. Now, the AAP suggests that parents will best protect the lives of their children by having them ride in a rear-facing seat until they reach the height or weight limit for the seat. Depending on the child and the seat, this could mean that a child will ride rear-facing up to the age of four. After that point, parents should continue to use a seat with a safety harness as long as they can, which could be until the child reaches 65 pounds. At that point, parents should transition to a belt-positioning booster seat.

According to Dr. Benjamin Hoffman, the chair of AAP’s Council on Injury, Violence, and Poison Prevention and the author of the AAP’s recently-issued statement, researchers have learned a great deal about car seat’s potential to save child lives. In particular, he cited a lawsuit in Texas where a manufacturer was held financially liable for failing to warn parents of the risk imposed by switching a child to a front-facing seat from rear-facing after a 20-month-old toddler suffered major injuries while riding front-facing during a crash.

Updated recommendation not required by law, but still advisable to follow

The updated recommendations are just that—recommendations. West Virginia law (requires only that parents use a car seat up to age eight, which can include the use of a booster seat). While the use of a rear-facing car seat up to the point when the child becomes too large to ride facing the rear isn’t required by law, it could mean the difference between life and death for a young child. According to Dr. Hoffman of the AAP, proper use of a car seat can reduce a child’s risk for serious or fatal injuries by over 70%.

If you or your child has been injured in a crash in West Virginia or southern Maryland, find out if you have a claim for money damages for these injuries by contacting the seasoned and effective Martinsburg personal injury lawyers at Burke, Schultz, Harman & Jenkinson for a consultation on your case at 304-263-0900.