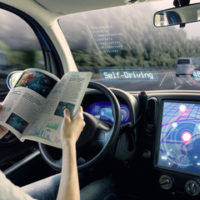 A recent crash in Utah has drawn renewed attention to potential safety concerns with vehicle automation systems. Specifically, experts question whether drivers understand the continued need to remain engaged in the driving process, even while automation systems are running. Read on to learn more about this issue, and contact our Martinsburg personal injury attorneys if you’ve been injured in a car crash in West Virginia.

The crash that prompted the recent concern with automated driving systems occurred in Salt Lake City and involved a Tesla Model S and a fire truck. The Model S, the driver of which explained that the autopilot system was running at the time of the crash, rammed into the rear of a fire truck while traveling on a major highway. Tesla later told the media that the driver had not put her hands on the wheel of the Model S for 80 seconds prior to the crash.

Drivers may suffer from “mode confusion” when vehicles are partially automated

This recent crash may become the first in a line of similar accidents as automated driving systems become more common. Experts caution that drivers may not always understand the degree to which they need to remain engaged while these “self-driving” programs are operating the vehicle. One expert described the effects of “mode confusion” on drivers who are operating vehicles with partial automation. Missy Cummings, the director of the humans and autonomy lab at Duke University explained to Consumer Reports that the degree of computer control under which the vehicle is operating may not always be clear to the driver. She noted that the “drivers do not understand the mode that the automation is in, and what its limitations are,” and that “the more we put in these ambiguous driver-assist technologies that potentially can drive the car in some limited capacity, we will see more of these accidents, absolutely.”

Safety advocates are calling for auto manufacturers to put safeguards in place that would prevent a driver from checking out while using automated driving systems. Consumer Reports’ vice president of advocacy, David Friedman, notes that “by taking a few straightforward steps—like warning drivers that they have tuned out, ensuring driving automation is available only when it is safe, and improving emergency fallback systems—car companies can reduce the risk of automation-induced driver distraction.” These could include systems that track driver eye movement to ensure drivers are looking at the road, as well as technology that only allows automation systems to operate when the vehicle is on limited-access highways. Should these types of accidents become more commonplace, both inattentive drivers and auto manufacturers who do not take steps to ensure driver attention may become legally responsible for the resulting injuries.

If you’ve been hurt in a West Virginia car crash with an inattentive driver, find out if you’re owed damages for your injuries by contacting the seasoned, aggressive, and trial-ready Martinsburg personal injury lawyers at Burke, Schultz, Harman & Jenkinson for a free consultation on your case at 304-263-0900 or 304-LAWYERS.