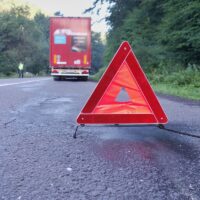 Tragedy struck on a recent Wednesday when a 13-year-old girl from Sandyville died in a fatal car crash. The accident is a reminder of the added dangers of driving during the winter season, especially during the holidays. Continue reading to learn more about the crash. If you or someone you love was hurt or killed in an automobile collision in West Virginia, call a knowledgeable Martinsburg car accident lawyer.

The accident occurred at around 3 p.m. on a recent Wednesday near the Haines Branch Road exit in the southbound lanes of Interstate 77. According to Kanawha County officials, an SUV was trying to pass a tractor-trailer while traveling along I-77. The SUV collided with the semi-trailer while trying to move back into the left lane. The impact caused the SUV to spin and flip over.

The SUV was carrying two passengers and a driver, including a 13-year-old girl, an 18-year-old boy, and a 65-year-old woman, all from Sandyville in Jackson County, West Virginia. The turmoil resulting from the impact caused the young girl to be ejected from the vehicle during the crash. The driver of the vehicle was taken to a nearby hospital and released after treatment of minor injuries, while the 65-year-old woman was treated for critical injuries. Tragically, the 13-year-old girl died.

Police were reconstructing the circumstances of the accident and investigating for contributing factors, including whether the passengers were wearing seatbelts. The driver of the tractor-trailer was cooperating with the investigation, as were other drivers who witnessed the accident.

Every year, car crash numbers skyrocket during the winter holidays. For example, statistics from the National Safety Council indicate that the number of fatal car crashes around New Year’s Eve and New Year’s Day was 10% higher than the rate even just a few weeks later in January. The National Highway Traffic Safety Administration (NHTSA) likewise found that the average number of traffic fatalities during major holidays in 2017 was 119 per day, as compared to 102 fatalities per day the rest of the year.

Safety experts posit that many factors are contributing to this annual uptick in accidents. As people celebrate and take time off of work, and deal with the additional stresses inherent in the holiday season, the number of drunk drivers on the road increases significantly. Moreover, inclement weather conditions make every trip on the road that much more hazardous. People are also more likely to drive while stressed or distracted over the holidays, increasing the risk of a crash.

CALL FOR HELP AFTER A WEST VIRGINIA CAR CRASH

If you or someone you care about has been hurt in a traffic accident in West Virginia, call the professional and effective Martinsburg personal injury attorneys Burke, Schultz, Harman & Jenkinson at 304-263-0900 or (304) LAWYERS for a free consultation.