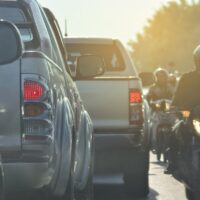 Riding a motorcycle carries many advantages. Motorcycles are cheaper than passenger cars, they tend to be more fuel-efficient, and they are generally better for the environment. They are also significantly more dangerous, especially when overly-aggressive motorcycle riders engage in dangerous maneuvers to beat the traffic or simply for fun. One such maneuver is known as “lane splitting.” Continue reading to learn about lane splitting in West Virginia, and call a seasoned Martinsburg motorcycle accident lawyer if you’ve been hurt in a motorcycle crash in West Virginia.

What is Lane Splitting?

Lane splitting, also called white-lining, lane sharing, or filtering, occurs when a motorcyclist rides in between lanes of traffic in order to get around traffic jams and slow-downs. Bikers and others support lane-splitting because it can cut down on traffic congestion, avoid rear-end collisions, and get motorcyclists off highways faster.

In many states, lane splitting is illegal because it is considered very dangerous. If any car in traffic suddenly changes lanes or swerves, or if someone opens their car door, then the motorcycle is likely to end up in a serious crash. Drivers who suddenly see a biker in between lanes may startle and make a sudden move. Even for experienced riders, lane splitting is considered a dangerous maneuver, requiring precision driving, deliberate attention, and optimal conditions to avoid a catastrophic accident.

Due to the dangers to bikers and other motorists created by lane splitting, in just about every state other than California, lane splitting is illegal. Even in California, it is not specifically “prohibited,” although it is still generally discouraged. What about West Virginia?

West Virginia, like other states, bans the practice of lane splitting. Bikers who engage in lane splitting can receive a traffic ticket, a fine, penalties on their license, and they may be liable for any collision that results from the action. Moreover, if a biker engages in lane splitting and gets into a crash that might be the fault of another driver, the biker may lose out on their chance for recovery. Because it is illegal, lane splitting is strong evidence of comparative negligence by the motorcycle rider.

California recently removed its prohibitions on lane splitting, although it is not clear that any other state, including West Virginia, is likely to follow suit. No laws permitting lane splitting are currently working through West Virginia’s legislature, although if the experiment in California does not result in increased motorcycle accidents, then other states may follow California’s example in the future.

GET HELP WITH A MARTINSBURG MOTORCYCLE ACCIDENT CLAIM

If you or someone you care about has been injured in a motorcycle crash in West Virginia, call the passionate and professional Martinsburg personal injury attorneys Burke, Schultz, Harman & Jenkinson at 304-263-0900 or (304) LAWYERS for a free consultation.