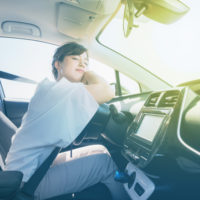 Safety researchers have conducted extensive research on the dangers of distractions from smartphones, as well as the lethal mix of intoxicating substances and driving. More and more, these researchers have turned their focus to the subject of the effects of sleep deprivation on driving abilities, and their findings have been troubling. A new study shows that drowsy driving is a more significant factor in causing car accidents—especially injury accidents—than previously believed. You can learn more about the study below, and can contact a knowledgeable West Virginia personal injury lawyer if you’ve been hurt in a crash with a drowsy driver.

Tracking drowsy driving can be a difficult task for safety experts and law enforcement. Drowsy driving doesn’t leave a chemical mark, unlike alcohol use, and police may not always find symptoms of drowsiness when pulling over a driver. For this reason, the rate of crashes tied conclusively to drowsiness hovers between 1 and 2%. However, video footage of drivers shows the rate to be significantly higher.

The AAA Foundation for Traffic Safety conducted a study that looked more closely at the role of drowsiness in traffic accidents. Their researchers used video footage taken of participants in a long-term study that looked at driver behavior. The researchers focused in particular on the six seconds of footage taken of drivers immediately before they were involved in a crash, looking frame-by-frame at the film for signs that the driver was drowsy at the time of the crash. The study found that between 9% and 9.6% of all participating drivers showed signs of drowsiness before a crash. This percentage was even higher when researchers looked specifically at injury accidents and accidents that caused major property damage—over 10% of these accidents involved a drowsy driver.

Victims of drowsy drivers deserve compensation after a crash. Drowsy drivers put others at serious risk of injury by getting behind the wheel when they are too drowsy to drive responsibly. By using eyewitness or security camera footage, as well as other evidence, a personal injury attorney can help these victims pursue a claim against the reckless drivers who caused these crashes.

If you or a loved one have suffered injuries in a West Virginia drowsy driving crash, get help seeking compensation for your injuries by contacting the professional and effective Martinsburg car accident lawyers at Burke, Schultz, Harman & Jenkinson for a free case evaluation at 304-263-0900.