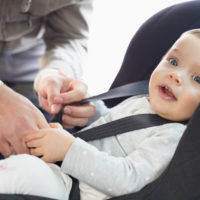 As parents, we spend time researching and selecting the safest possible car safety seat or booster seat for our children, selecting the device that is most likely to protect them in the unthinkable event of a crash. When in a rush to get in the car and go, however, even conscientious parents can lose sight of the bigger picture and fail to ensure that their children are properly restrained. Sadly, these momentary lapses in concern for safety can have major consequences. A recent study has found that a failure to properly use restraints has a strong correlation with child fatality rates in car accidents.

The study was conducted by researchers at the Brigham & Women’s Hospital in Boston, with the results recently published in the Journal of Pediatrics. The researchers sought to discover what factors were present most often in accidents that resulted in a child fatality. They used data gathered in the Fatality Analysis Reporting System from over 18,000 fatal accidents involving a child under age 15 occurring between 2010 and 2014. Among these accidents, 16% caused the death of a child. The researchers looked at factors such as the types of vehicles involved, the average speed of the cars on the road where the accident occurred, and whether the child involved was appropriately restrained.

When transporting a child, take the time to make sure that you understand how the child’s car seat works and that you have secured it in the car properly before you get on the road. Be sure that you have used the correct size of child restraint, as well. In West Virginia, all children under age 8 who are under 4’9” tall must ride in a child safety seat of some kind, which can include booster seats.

While using the proper restraints are key to child safety, it is important to understand that even if your child wasn’t properly restrained at the time of the accident, you may still have a valid claim for damages against the at-fault, negligent driver who caused the accident. Contact a skilled car accident lawyer near you to discuss your case.

If you or your child has been injured in a West Virginia motor vehicle accident, contact the aggressive and dedicated Martinsburg personal injury lawyers at Burke, Schultz, Harman & Jenkinson for a consultation, at 304-263-0900.